Installing a Paver Step for Patio or Front Door

Previous Next
Installing a Paver Step for Patio or Front Door

An easy way to update a front entry, or update a back step, installing pavers is an easy way to give a quick facelift to an existing concrete step. Adding to The Concrete

Similarly to how we would build up a new patio, we take levels of stone and sand as a bedding and create a level base. Once the base is level we’ll then take wall stones and build up a new base. In this instance, we added a new step, turning the original single step into a two-step entrance.

The wall stones we use have a finished side giving a contrasting texture to the E.P. Henry pavers utilized on the patio. These wall stones are also partially buried under the base to provide a solid step. Once these are in place, we fill with a clean stone mixture to fill in any gaps between to ensure there will be no movement overtime. This is built up two layers for the primary step with a single layer for the second step. We added an extra 18 inches past the original step to allow for a new paver top to match the new patio with a solid border. 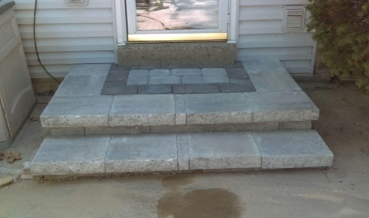 If the caps and hole aren’t filled when being installed, they can lead to the steps becoming raised and shifting over time. When you have someone installing new steps, you want to make sure they are properly filling in the gaps.

During the entire process of adding a new step, or covering an existing, we utilize levels to make sure the steps remain level.

When properly installed, brick paver steps can give years of curb appeal.